The software is there for the user

Why User Interface Design is so important

Since the first generation of computers, which were still operated by entering pure text, a lot has changed. Since the introduction of the Graphical User Interface, which allows even laypersons to use computers, usability is now the main focus. Today, the conception of the interface proves to be a complex interlocking of different development and design activities.

Software is not equal to software

With more and more complex technologies, their operation is also becoming more and more demanding. Differently trained users must be taken into account. Software should often not only be designed for desktop use, but should also be functional and intuitive to use on mobile devices. This is where inner logic and the balance between consistency and convention count. The user should be able to find operating functions and elements easily. However, different standards and trends must also be taken into account so that intuitive operation is retained on all devices.

Some sub-disciplines of user interface design 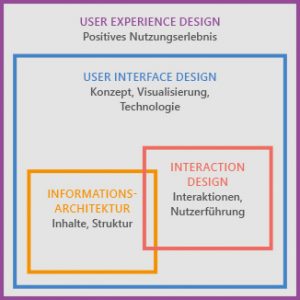 User Interface Design comprises first of all the conceptual, visual and technical design of digital interfaces between man and machine. The user interface and the associated interactions are designed according to aspects of user quality and design attractiveness.

The Information Architect initially lays the foundation for the further design. Above all, he categorizes and structures the contents and functions so that the user can find them easily. For a qualitatively valuable user interface design, this task should not be underestimated.

The Interaction Designer plans the provided interaction possibilities and the necessary user guidance. This also includes aspects such as text, icons and the type of interaction – does the user operate with mouse, touch, swipe?

The User Experience Designer basically combines all the disciplines mentioned above and goes one step further. For him, the user experience is at the center of attention. This should be as positive as possible so that the user is enthusiastic and recommends the product to others. For this purpose, so-called “personas” are usually differentiated, which stand prototypically for the individual user groups of a software. Based on these personas, action scenarios are then designed and thus possible negative experiences are excluded.

Actual … the user interface is the product

“As far as the customer is concerned, the interface is the product.” | Jef Raskin*

Jef Raskin, one of the first interface designers at Apple, noticed this almost 20 years ago. And many quickly realized that he was right. Using the example of cloud computing software (SaaS), this can be explained quite simply.

Developer’s view: A developer usually has the big picture in mind. Uniformity is what counts. He prefers to use the latest technology, a single integrated database, and work through the cloud, where he has everything under control. Special solutions, offline capability, etc. – all this means more work for him and a higher risk of problems.

User perspective: A user views a software product from the perspective of his individual needs. He rarely looks into the full depth of the software, but simply at the user interface (UI). One would like to have an easy-to-use UI for his smartphone. Another would like a UI that fully exploits the performance of his desktop PC.

If one divides such different demands on the product into the above-mentioned “personas”, it is much easier to take them into account. The end product may no longer correspond to what a developer would have designed from the outset. Instead, however, more customer wishes are fulfilled, which makes the product more successful.

The fact that such an implementation involves more costs for the customer and may be less easily scalable to large user groups is a critical factor for many. Ultimately, however, consumers also know that a higher investment may be worthwhile for quality.

It makes sense, especially for midsize companies, whose requirements can vary greatly, to invest in adaptable software that meets all their user requirements.